Previous Next
Durian Fruit – A Truly Unique and Controversial Fruit 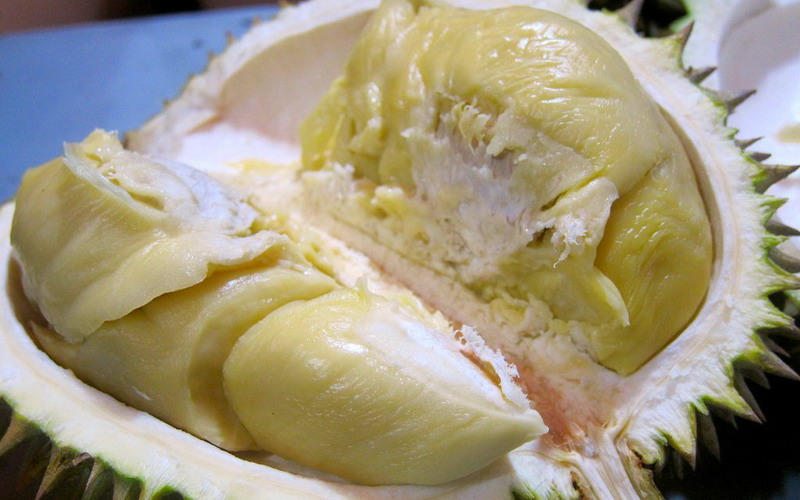 Durian is a fruit that has been eaten for centuries in Southeast Asia. The fruit has a strong odor and flavor. Some people love it, while others find the taste too pungent to stomach. Most people are not fond of the smell of durian, which is often described as having a stinky odor.

The fruit in Indonesia, known as “Duren” or “Durian” has a special place in Indonesia culture.

It is high in fiber and low in fat, making it one of the healthiest fruits on earth. It is also a good source of potassium, vitamin C, and magnesium. The fruit can be eaten raw or cooked into many dishes like durian cake, durian ice cream, and durian pancakes with syrup.

The fruit contains high levels of sugar and fat. The majority of its calories come from fat and it’s rich in cholesterol, copper, zinc, and vitamin C.

The fruit is typically sold whole with thick green skin that turns yellowish-brown on ripening. It has thorny spikes on its hard skin with waxy white flesh inside.

Why is it so Controversial? What are the Benefits of Eating Durian?

The fruit is famous for being a fruit that people either love or hate, and the reason why it’s so controversial is because of its unique flavor. It has been said to taste like chocolate, custard, and bananas.

The fruit is thought to have originated from Southeast Asia – specifically Indonesia and Malaysia – and has been cultivated there for thousands of years. It grows on trees that are native to these regions, and it can be found in other areas of Asia as well as parts of North America.

The health benefits of eating durian are not yet known conclusively but some studies have shown that the fruit may prevent cancer growth by inducing apoptosis in the body’s cells.

The Ins and Outs of Eating the Fruit Should You Eat The Seeds?

Durian fruits offer many health benefits. The seeds of the fruit can be eaten whole, but they are often removed from the fruit before consumption.

The mysterious smell of straight-up Durian has been described as a mix between rotting flesh and onions mixed with some ice cream thrown in for good measure. It’s an acquired taste if there ever was one and it’s a surprisingly divisive issue on social media when it comes to those who love the Durian and those who despise it (not to mention its unique scent).

Durian is a fruit that has many benefits but also has some side effects.

The fruit is one of the most consumed fruits in the world. It contains many nutrients and vitamins, like vitamin C; it’s also rich in potassium and magnesium. The fruits are rich in carbohydrates and have low levels of fat, making them an excellent choice for diabetics and people who want to lose weight. The fruits are rich in fiber, which helps digestion and prevents constipation.

Why do Durians Smell so Bad?

The smell of durian is caused by sulfur compounds, which are also found in onions and garlic. So the smell is not just coming from the fruit itself. But durians also have a unique mix of aromatic compounds that most people find unappealing. This is caused by the production of an enzyme called lipid peroxidase, which happens when the durian grows in warm weather and rains.

Support Ilham S. Koto
× How can I help you?
Go to Top